Friday certainly had its ups and downs. I woke up and was on the computer for a bit, and I enjoyed myself because of Tumblr and the Sims Social and also because T-Kun was online so I could talk to her for a very brief while.


I was doing my sit-ups when Hannah and Mama went out to take Ringo to the vet. I decided to stop before I was done so I could go say goodbye to him for the same reason I like to make sure I hug my parents and let them know I love them before I head out for a drive: there's always a chance, no matter how small, that that might be my last moment with them and I want to make sure it's a good one.

After the stairs and a shower, I rushed off to work. I had a stress-free day at work because I stopped worrying about the amount of completes I was going to get and just focused on the calls at hand. I also had some tea, which was nice. In between calls, I browsed Wikipedia. I went from MyKad, to Eddies, to Billabongs, to Waltzing Matilda, to the All-Black's Haka, and then back to Waltzing Matilda. I also ended up reading about the Mechanical Turk and a bit of the bombing of Dresden in between all that. I learn quite a lot in-between calls at work.

Near the end of the day, I lost a complete because the fire alarm went off. I followed the instructions pinned to my desk, but apparently we're not supposed to do that. Next time the alarm goes off and we're almost done, we're supposed to finish up unless the manager gets a call from the alarm company confirming that there's a real fire. That seems quite absurd to me, but I'll roll with it.

I asked Kelly a few questions after work and learned things. I like it when Kelly's around because then I can actually "Refer to [my] supervisor IMMEDIATELY on ANY issues" like the whiteboard near my desk says.

On Saturday, Lutfi will be in, so I won't be able to do that any more because when I ask questions from him it reflects badly on his position as a trainer, so I'll just keep schtum. As Uncle Shark(Shak? Chak? I need to ask him how to spell his name sometime) says, the boss is always right.

Anyway, I stayed back for an extra hour to finish my tabs and to memorize Waltzing Matilda. It is an incredibly catchy song. It ends in hobo-suicide, though, so make of that what you will.

The whole ride home I had the radio off while I sang the unofficial anthem of Australia. When I got home my happiness was promptly murdered when my mother told me that Ringo had died while he was undergoing an operation at the vet to remove a fluid build-up in his lungs. He had been misdiagnosed earlier in the week and so the medicine that I was forcing down his throat to try and make him better weren't actually helping. I'm glad that at least my last memory with him was giving him a goodbye stroke before he went off to the vet instead of fighting with him to get him to swallow pointless pills.

Despite all that, I still had a craving for karaoke that I had let build up all throughout the time I was at work, so I took the set and plugged it in Susanna's TV and we sang together for a while until it was time for dinner and mature grown-up conversation with Uncle Shark, Papa, and Mama.

I left at one point to check my computer, and I found the Secret Recipe website, so I gave the local branch a call to make sure they were still open. I then drove down to pick up some chocolate indulgence for Hannah, because chocolate cake is my default response to sadness among women. When I got home, I put it on a plate with a tiny spoon and then I brought Mercy and a glass of cold water over to Hannah's room. Mercy ran off and Hannah told me that she didn't like cake. She ate half of it anyway, though, and I got to have the other half. I gave her Faith to replace Mercy as role of comforter-in-chief for the next week. Until the ninth of September, 2011, he is her cat.

I then went and had a wee bit of wine and some conversation with my parents and their friend. I have learned from past experience that nobody tells me anything if I blog about everything they say, so this paragraph will be intentionally left vague.

Anyway after that I went on my computer for way too long. I was on Tumblr for a long while and then I read this and then I made a long blog post. I guess after that I'll take a shower and go to bed for a short while before waking up early for the weekend shift, where I will earn a lot of money for a lot of work, and after that it will be Geraldine's birthday party and I will be bringing the karaoke. It looks like it will be a difficult, then very fun day for me.

But yeah, rest in peace, Ringo. Even though you couldn't possibly find a better owner than Hannah in your next eight lives, hopefully you'll at least last a bit longer on your next few times around. Go make some friends your age who will actually want to play with you, and never ever lose your questioning meows. Those are adorable. 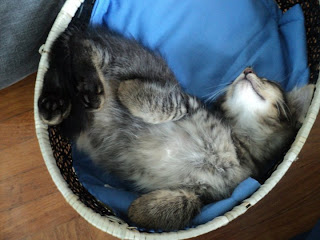 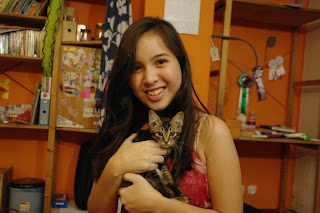 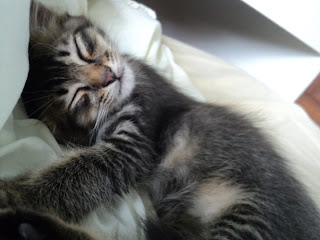 Posted by Shaun Cheah at 1:46 AM No comments: