I finished my Foundation in Science today. The test was pretty okay and I'm quite confident that I passed. Soon I'll finally be able to claim my certificate and start applying at different universities to get an engineering degree or something. You know what sucks? If I had failed a subject during my Foundation I would have finished sooner than now because I would have joined the new semester and done my Bahasa Kebangsaan then, and that semester finished about a month ago. It would have also meant that I could still hang out with Elo and Carmeni and that lot. Oh well, at least I saved my dad the cost of me resitting.

Yesterday was my last class, and it ended early. Two hours early, actually. I spent that time rescuing a pair of dogs that showed up as I was asking people what their overall score was (mine was 33/50, the highest was 42.5, the average seemed to be around 35). I will try to blog about the doggie rescue tomorrow, but I am tired tonight so here is a thread I started about it that you can read in the meanwhile.

I had a delicious breakfast this morning. I spent way more money than I should've on it, but our lecturer told us that we must eat before the test because hungry students can't focus, so I'll just consider it my last assignment. Easily the most delicious assignment I've ever had. 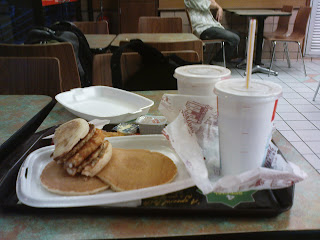 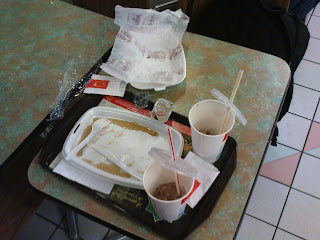 I finished everything and it was all good. I was still kinda hungry afterwards. Maybe I'll have a couple more extra hash browns next time.
I saw a poster for the dogs before my test. I took a picture of it; see if you can spot me in the background.

Hannah wanted to watch Shaun of the Dead today. I had told her that if she watched that movie I would buy a large packet of Lays, a bowl of M&Ms, and a bottle of coke to share with her and whichever friend she decided to watch it with. I was hoping she'd pick Ebony because Ebony is quiet so Hannah wouldn't be distracted so she could catch all the little jokes and repeated lines and such, but Hannah picked Audrey who is a louder person and therefore not as good to watch movies with, especially one as detail-heavy and layered as Shaun of the Dead.

Anyway aside from ending up with a more boisterous viewing partner than I had anticipated, there were other things that went wrong, too. There were no Lays to be found anywhere, or any decent-quality potato chips, for that matter. They had all been snatched up when "Balik Kampung" started. All the convenience stores and hypermarkets had bare shelves and it was very unnerving, like everyone had been stocking up for the apocalypse and now there was nothing left except the shittiest flavours that nobody wanted, like seaweed and curry. Also, we were interrupted halfway when some contractors came through to fix Hannah's air conditioner. We ended up moving to the living room. Also right at the bit when they were stuck in the cellar, Hannah skipped to the end accidentally and killed all the tension. Nice going. Anyway, it was still Shaun of the Dead so it was still awesome, I'm just disappointed that it wasn't as awesome as it could've been.

Before the movie Audrey had told me that all zombie movies were alike, and so after the movie I asked her which zombie films she'd seen. She said I Am Legend. In fact, that was the only movie she listed. I told her those were vampires, but she insisted I was wrong, as if there was some way I of all people wouldn't know the difference between a zombie and a vampire. I tried to explain to her how I Am Legend was actually a pretty terrible adaptation of the book because it had changed the monsters so much and the Hollywood ending they gave it basically pissed all over the legacy of the book, but she wouldn't let me. The Omega Man did a much better job of adapting the book. The only things I Am Legend got right was casting an excellent lead and getting a real good atmosphere for the city.

Oh yeah I also learned that the only zombie movies Hannah has seen are Zombieland and Shaun of the Dead. I'll have to show her the Dawn of the Dead remake and the original Night of the Living Dead, and maybe RotLD if she's up for it.

Anyway, I drove Audrey back home and picked up her sister along the way. She conceded in the car that I Am Legend was not a zombie movie. We still argued about other stuff, though. When Hannah and I were driving back, I got a text from Audrey saying that Hannah's phone was still at Audrey's house. We went back to get it and I told Hannah about yesterday and how I helped rescue the doggies. Audrey texted me and apologized for arguing. I told her there was nothing wrong with arguing and if anyone should be apologizing it was me for getting so upset with her for not paying enough attention to the movie. Then we came home and I took a nap from 8 until 10. When I woke up I saw that I got a text from Audrey asking if we were cool. I replied that we were. I hope she doesn't misinterpret the 2-hour delay as some sort of passive-aggressive thing. I don't do that kind of stuff, I just leave it to the experts (women).

Hm. This post was longer than I expected it to be. I wanted to go to bed early because I only got three hours of sleep yesterday. I still have to do my exercises and take a shower. Bleh.
Posted by Shaun Cheah at 10:54 PM